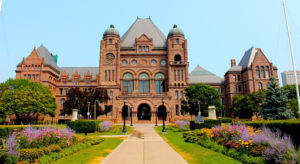 Here are the top 10 takeaways from the announcement:

Employer Health Tax Exemption private-sector employers may be eligible for an exemption from the EHT up to $450,000 of payroll.  Further, the EHT exemption will increase to $490,000 in 2019.

Election Finances Act Amendments The government is introducing legislation that would reduce the allowances to registered political parties and constituency associations in 2021.  By the end of its mandate, the government will eliminate allowances completely in 2022.

Measures to Enhance Business Competitiveness Measures to make the province more business-friendly were already announced such as the cancellation of the cap-and-trade carbon tax and the capping of the minimum wage at $14.  Today the government announced that WSIB premiums will be reduced.

Ontario Place The Ford Government is committing to redeveloping Ontario Place, a major destination for Ontarians and tourists that has been mothballed for years.  The government will soon introduce legislation that will streamline the governance structure and set the stage for a “bold new Ontario Place.”

Broadband & Cellular The Province will release a broadband and cellular strategy in early 2019, outlining an action plan to expand broadband, digital services and cellular access in unserved and underserved areas.

Natural Gas The government is taking action to allow the private sector to expand access to natural gas across Ontario, with the introduction of the Access to Natural Gas Act, 2018.

WSIB Review The government is launching a review of the workers compensation system to ensure it remains sustainable in the future.

Cannabis Retail Stores Strict rules will be implemented and regulated by the Alcohol and Gaming Commission of Ontario (AGCO) to ensure that cannabis distribution is tightly controlled.   Zero tolerance will be enforced for selling cannabis to minors; strict limits will be enforced on locating stores near schools, playgrounds, parks and child care facilities; hefty fines will be applied to retailers who contravene the law.

Mental Health and Addictions The government will be working closely with front‐line care providers, along with mental health and addictions organizations, hospitals and, most importantly, patients to ensure that the people of Ontario get the mental health care they need.

Toronto Transit Commission Subway Upload The TTC infrastructure will be the Province’s responsibility instead of the City of Toronto.

Auto Insurance The Government is committed to reducing lower auto insurance rates.  This will include a review of how auto insurance rates are regulated in collaboration with the Financial Services Regulatory Authority of Ontario.  Modernization measures will include: using electronic communication to show proof of insurance; the deployment of usage-based insurance technology; the launch of e-commerce similar to what is offered by financial institutions.

Review of High-Speed Rail The Province is exploring the potential for a faster and more reliable passenger rail service, including options to upgrade existing rail corridors, create new ones or utilize other forms of transportation.

If you require more information on any of these items or the fall economic statement, our team of consultants is available to provide further detail.